In Television where time is money and a medium and that can be referred to as a grueling machine, the rehearsal process has decayed considerably. Rehearsals have somewhat become a skeleton of the scene — a modest mold for the director and crew to get a sense of the scene about to unfold, and the actors only the opportunity to get their feet wet. Unfortunately in this day in age, mostly in film and television – the rehearsal period has dwindled due to budget restrictions on the productions. Consequently, many projects have suffered. Productions in which the actors do not have the adequate time to rehearse and prepare with one another deprive the story of interesting and fascinating life. Ironically, the films are less successful at the box-office and overall profit margin lower due to its final result of the overall product. So much of a film’s earnings are based on reviews the film receives upon release. This reality creates a dire problem for the cast, or at least the artistic ones who often elevate a particular project’s value. These artists have a reliable and dependable means of achieving what they set out to accomplish and are well-trained craftsmen. They do the work, they put in the time. If the production doesn’t allow for rehearsals, it is all the more significant that the actors find time to get to know each other, learn and explore one another, develop an awareness and curiosity for their scene partner to reach meaningful and emotional depths together. These actors will start to have real thoughts and opinions on each other and can live and act on these impulses. The cast must be thinking during the scene, not just imitate having thoughts. Drama is a dance and interaction between the characters – through such work, the actors should learn to create an emotional dependency on one another, in which there is a reliance and need to affect and be affected by one another. The Group Theater spent much of their time working with each other and exploring the relationships of the material and their partners. Much of the time, the actor can find direct-relatable qualities that parallel the demands of the material. If the actor stimulates their curiosity and has a willingness to put their attention on their partner, they can begin working to find the similarities and differences of the relationship in the material. The actors can use the available realities, they can search silently for their likes and dislikes, admiration and attraction, feeling superior, inferior, all of which will contribute to real and meaningful responses that the audience then feels because the actors feel it, it’s reality and the truth. The actors never have to divulge their work publicly or even express it to each other, although if they are willing to take the risks and put their egos aside, communication on such levels bare extraordinary results. 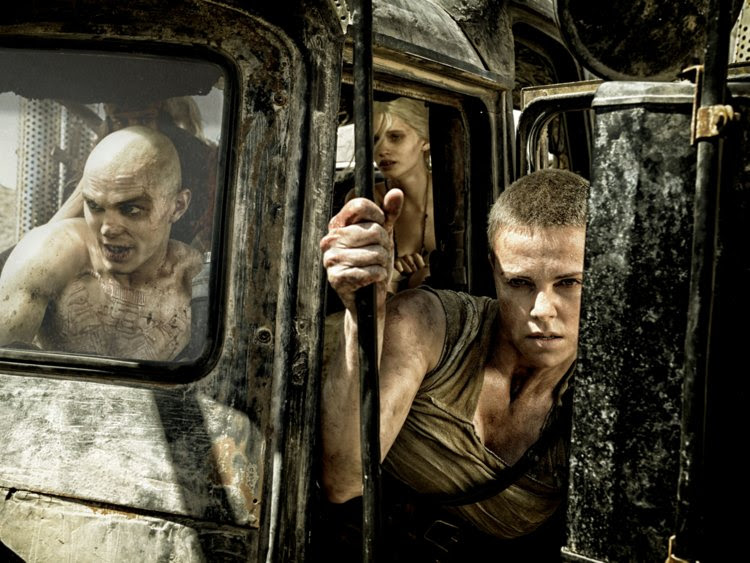 While working on Mad Max: Fury Road, Academy-Award winner Charlize Theron and Tom Hardy used their personal realities and tensions on set to propel the behavior and truths of the material. The actors shot on location desert in Swakopmund in Namibia for more than six months.

Charlize Theron: “We f–kin’ went at it, yeah. And on other days, he and George [Miller, the director] went at it,” and “It was the isolation, and the fact that we were stuck in a rig for the entire shoot. We shot a war movie on a moving truck — there’s very little green screen. It was like a family road trip that just never went anywhere. We never got anywhere. We just drove. We drove into nothingness, and that was maddening sometimes.”

“It’s material that’s really frightening — we didn’t have a script. Tom and I are actors who take our jobs seriously. Both of us want to please the directors we work with, and when you don’t know if you can deliver on that, it’s a frightening place to be — and for Tom more than me, because he was stepping into big shoes.”

As artists, the actors were willing to take risks and honor their moment-to-moment realities, providing themselves the luxury to supply their instruments with creative freedom, using their truths to ultimately feed the demands of the characters and relationships.

“I’d rather have that honesty working with someone than someone who fake-smiles through something — especially for actors, when your job is to go for the emotional truth. When you’re with somebody and you don’t feel like you’re in their emotional truth, then you don’t trust them,” she says. “I think good actors go all the way. If you want to be a safe actor, and you emotionally protect yourself from things getting out of hand, the performance will show all of that. Anyone who really, really, really goes into the deep dark corners of what emotional truth is, as somebody who works opposite of that, you have to be grateful for that. I beg for that. I beg for that on a job, that potency to the stew that makes it that magic that it is.” “We drove each other crazy, but I think we have respect for each other, and that’s the difference.”

“This is the kind of stuff that nobody wants to understand — there’s a real beauty to that kind of relationship.”- Charlize Theron – ESQUIRE

Professionally, co-star Tom Hardy bid his scene partner a message of admiration and respect for the honesty she supplied, and hopefully the results of such work will be evident. Hardy’s message on the gift read: “You are an absolute nightmare, BUT you are also f–king awesome. I’ll kind of miss you. Love, Tommy.”

TR: How do you adapt to different directing styles when you’re on a set? Or do you, as an actor?

HK: Well, much is made out of that. And there’s really not that much for the actor to adapt to. An actor adapts to the quality of the director. Style is something that’s almost a physical thing. The actor’s technique does not change because a director’s style changes.

TR: How about in the sense of the rehearsal process. Are there certain ways that–
HK: –Let me say, blanket, that nine out of 10 Hollywood directors do not know how to rehearse. And most actors do not know how to rehearse. The rehearsal process is a very important part of the creation. And it will do directors and actors a lot of good to study the craft to learn how to rehearse. To learn how to do their homework. To learn what to do as homework.
TR: Specifically, how does one rehearse?
HK: Are you asking that?
TR: Yes, I’m asking that.
HK: Oh, I could not answer that.
TR: You say they don’t know how to do it. Speaking to any young directors reading this magazine, what would you tell them?
HK: Okay. They have to go out and study. Your friend over here, Brian, was saying it’s difficult for him to relate to his friends the experience of being a Marine. Well I cannot teach a class here now on acting. They have to immerse themselves into it. I can tell you that if you do not take the training that a Marine takes, and you are thrown into the jungle, you’re probably going to die. If you do not take the training an actor needs to take when you are put into that human jungle of cement and palm trees, you are going to die. You need your craft to support you, to guide you, to sustain you. I can only advise your directors to study acting. And your actors to study acting.

The goal for the actors and cast are to achieve ensemble results, an emotional dependency and trust to accomplish experiences rather than mechanical acting. If actors are not afforded adequate rehearsal time on set — they should certainly be using rehearsals in class. They will discover results that utilize their potential and the material’s weight — and although they may have to work differently with different actors, they will eventually understand their own potential and capability, and then simply explore creative means to achieve those results. If rehearsals are never used, the actor will never realize their true capacity to experience a tangible and visceral relationship to the other actors and characters in the piece.

Improvisatory nature of the actor
Scroll to top